Jess and the gang head to New York, where Schmidt believes he is being honored at his high school. Jess meets Det. Jake Peralta and helps him on a case, which leads her to Brooklyn’s 99th Precinct and a fateful encounter with Gina Linetti and Capt. Raymond Holt. Meanwhile, Nick and Winston scramble to make subway fare, while trying to impress Det. Charles Boyle, and Cece faces off with her new mother-in-law. The crossover starts on Brooklyn Nine-Nine S04E04 The Night Shift (I). 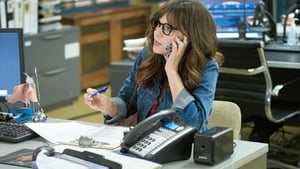